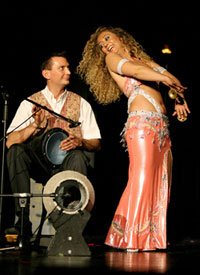 - The Government of Duisburg awarded Leyla & Roland with the "Silver coin" for their appreciated cultural work in/for Duisburg, recieved November 2010 at the 20th OFE in Duisburg Rheinhausenhalle from the Major of the city of Duisburg Mr. Kocallar

Leyla and Roland Jouvana are available all year (on weekends) on a world tour. She made guest appearances in more than 40 countries on all continents and coached more than 90,000 students worldwide with its sought-after training and WS-concept. In her own dance school in Duisburg, they offer courses for beginners to master, and training for a dance teacher with certification, the state-approved C.O.D.E. (Certified Oriental Dance Education). Many of their DVD productions were / are global bestsellers, such as "21 shimmies & 1001 Variations", "More shimmies" and "Layers with Leyla" (IAMED Hollywood Productions). They also recorded over 500 television appearances and Publications on magazine covers at home and abroad. Leyla discovered after Jugosl. Folklore and jazz dance eventually her love of oriental dance and now to Zumba & Bellydance Fitness! After numerous study trips to Egypt and intensive lessons with renowned instructors, she was boarding a solo Oriental dancer by numerous national and. performances, video productions, press reports and TV appearances (RTL, ZDF, MDR, WDR, etc.) online classes at SuhailaSalimpour, known to a wide audience. For over 20 years it is now an internationally acknowledged dancer and choreographer for Oriental dance. She regularly travels with her husband Roland (drum) and her ensemble many cities on all continents. They performed several times on large dance festivals abroad to eg New York, Hong Kong, Beijing, San Francisco, Orlando, Atlanta, Budapest, Prague, Brussels, Nice, London, Leeds, Madrid, Paris, Cairo, Vienna, LA-Hollywood, New Mexico, Mexico City, Seatle, Orlando, Montreal / Canada, Salzburg, Budapest, Boston, Zurich, Basel, New Delhi, Italy, Denmark, Adelaide, Perth / Australia, The Netherlands, Morocco, Canada, Turkey). Further, it is sought after juror & special guest in various dance competitions and championships in oriental dance world. She developed both its unique concept "Bellydance Fitness" (the counterpart to Zumba) as well as their professional approach Cymbals & Drums. The own dance studio is now one of the largest and most successful orient. Dance studios in Europe.

Leyla has established the annual 1st Advent "Oriental Dance Festival in Europe" in Duisburg into being, which has now become the largest oriental dance show in Europe (attendance record: 4,500) Furthermore, it is recognized instructor for dance teacher with a certificate at the Bundesverband eV In its work in 2001 in Rosengarten Mannheim "Ball of the Stars" in Memoriam Hannelore Kohl for oriental dance she was considered one of the world's best dancers and as "Shimmy Queen", among others, the trade press on your international tours. In 2002, she was of the Giza Academy (LA, USA) voted best live dancer and drum solo performer. "In July 2004, she received the" Halima-Award "in the category" Best Dancers "," one of the most successful dance studios in Europe "" one of the most successful Orient. Festivals in Europe "and" Shimmy Queen ".

Roland is 17 years drummer and husband of Leyla. It supports artistic and rhythmic Leyla and is one of the best and most popular drummers of global orient. Dance scene. With Leyla together, he participated in numerous (stage) shows and workshops at home and abroad. He is one of the most famous drummers of the orient. Dance scene in Germany. He has mastered not only playing on orient. Percussion (darbuka, Duff, etc.) perfectly, but has his knowledge by playing many more (percussion) instruments, eg Drums, congas, frame drums, cymbals, etc. expands. Roland is also the inventor of the orient. Pedal and the first orient. Drummers worldwide who plays simultaneously with 3 drums / instruments with hands and feet. Appeared several times on Leyla & Roland as a star guest, with Ensemble, to the greatest orient. Dance festivals (Cairo, Sicily, Paris, Vienna, Zurich, Denmark, Finland, India, USA, etc.).